When we arrived at Land of Hope, I expected a heavy atmosphere, and the feeling of despair to be there. Instead, we were greeted with an openness and joy. God was there. Yes, there was garbage there….a lot of garbage. There was malnutrition, but I am told that has improved drastically. There was smoke in the air from burning garbage. But then I realized that the Gospel was there too.

I was sitting on the ground with some little boys looking through a Bible in graphic novel form, so there were a lot of pictures. One of the boys would flip through the book pointing at various Bible characters, and was expecting me to tell them who they were. Noah, Abraham, Elizabeth and Mary; then we came across Jesus. That is some Spanish I know!  We saw a picture of Jesus on the cross. The boy stopped and pointed to Jesus and waited for me to identify him. Then the boy pointed to the cross and identified it in Spanish, he pointed to the nail pierced hands of Jesus and said something in Spanish I didn’t understand. He saw my look of confusion as I couldn’t figure out what he was saying, and he picked up a crayon and used it as a pretend nail, making a hammering motion down on it while he had it placed on the palm if his hand. That is the Gospel!!  Regardless of this boy’s past or future, he was carrying around the Gospel. The Bible says the Word of God will not return void. It has a purpose and it gets into your heart.

My prayer is that the Gospel continues to be put into the heart of this boy. As he grows and learns, the Gospel will continue to grow into him. 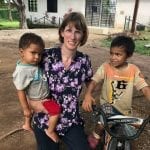 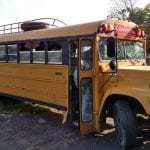